Offered through a partnership between the Ohio Supreme Court’s Judicial College and the National Center for State Courts’ Institute for Court Management since 2002, the Court Management Program addresses specific training needs of court leaders.

Each court professional attained the credential by completing a three-year program of courses, including the purposes and responsibilities of courts, case flow management, and court performance standards.

Ohio is among a handful of states that bring this training program to court professionals so that traveling out-of-state isn’t necessary.

Participants represent all jurisdictions and regions of the state and include court administrators, elected and appointed clerks, chief probation officers and other court staff in management positions. 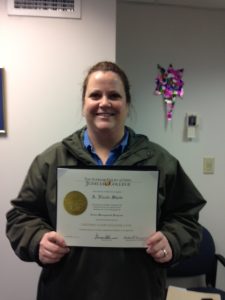