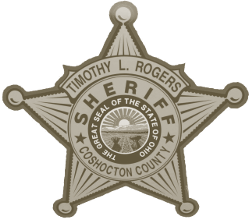 On July 30th 2016, at approximately 11:58 AM Dispatch received several 911 calls in reference to a 1 vehicle accident on SR.83 just north of CR.24. Upon arrival of the Deputies it was determined that 56 year old Walter J. Rice Jr. of Parma, Ohio was traveling southbound on SR 83 on his 2005 Harley Davidson motorcycle. Mr. Rice came out of a slight curve in the roadway and went off the right side of the road striking the guardrail face. Mr. Rice was then ejected from the motorcycle and the motorcycle continued down the guardrail and then down an embankment. Mr. Rice was wearing a helmet at the time of the accident. Mr. Rice was transported to Coshocton County Hospital and then flown by med flight to Grant Hospital. Assisting at the scene was Three Rivers Fire District, Coshocton County EMS, Princes Wrecker Service and REACT.